WHO is launching today a new strategy to respond to the urgent problem of antimalarial drug resistance in Africa. The strategy is being released during World Antimicrobial Awareness Week, a global annual campaign to improve awareness of the growing threat of resistance to antibiotics and other medicines.

In recent years, there have been reports from Africa of emerging parasite resistance to artemisinin – the core compound of the best available medicines to treat malaria. There are also worrying signs that parasites in some areas may be resistant to drugs that are commonly combined with artemisinin. Vigorous measures are needed to protect their efficacy.

“Although antimalarial drug resistance is a serious cause for concern, artemisinin-based combination therapies (ACTs) remain the best available treatment for uncomplicated P. falciparum malaria,” notes Dr Pascal Ringwald, lead author of the new strategy and a Coordinator in the WHO Global Malaria Programme. “Health care providers should continue to prescribe and use ACTs to treat confirmed malaria.”

To date, resistance to ACT partner drugs has not been confirmed in Africa, and the treatment remains highly efficacious. However, there are some worrying signals: data are lacking for several countries, and contradictory findings on ACT efficacy need to be further assessed.

Given the heavy reliance on ACTs in Africa, full-blown treatment failure could have very serious consequences. “We don’t have that many options for malaria drugs,” notes Dr Dorothy Achu, WHO’s new Team Lead for Tropical and Vector Borne Diseases for the WHO African Region.  As it stands, we just have artemisinin-based combination therapies for uncomplicated malaria. So any threat to these drugs could lead to lots of cases and deaths, which we obviously want to avoid,” she added.

In 2016, researchers at Imperial College London modelled the potential impact of widespread resistance to both artemisinin and a partner drug in Africa. Under this scenario, there would be an estimated 16 million more malaria cases each year, and about 360 000 more severe cases requiring hospitalization – leading, in turn, to nearly 80 000 additional malaria deaths annually. Under this same scenario, the yearly economic impact across the African continent was estimated at US$ 1 billion.

The new WHO strategy builds on lessons learned from past global plans and complements existing strategies, including broader efforts to respond to antimicrobial resistance. It aims to minimize the threat and impact of antimalarial drug resistance in Africa through 4 pillars:

The strategy’s 20 recommended interventions include, for example, generating standardized data on drug efficacy, promoting equitable access to quality diagnostics and drugs, ensuring optimal vector control coverage in priority areas, and developing innovative tools to limit malaria infection and transmission. Interventions should be tailored to the local context, with the support of global and regional stakeholders.

All of these interventions require strong health systems and investments in primary health care, which are the backbone of any successful response to malaria. 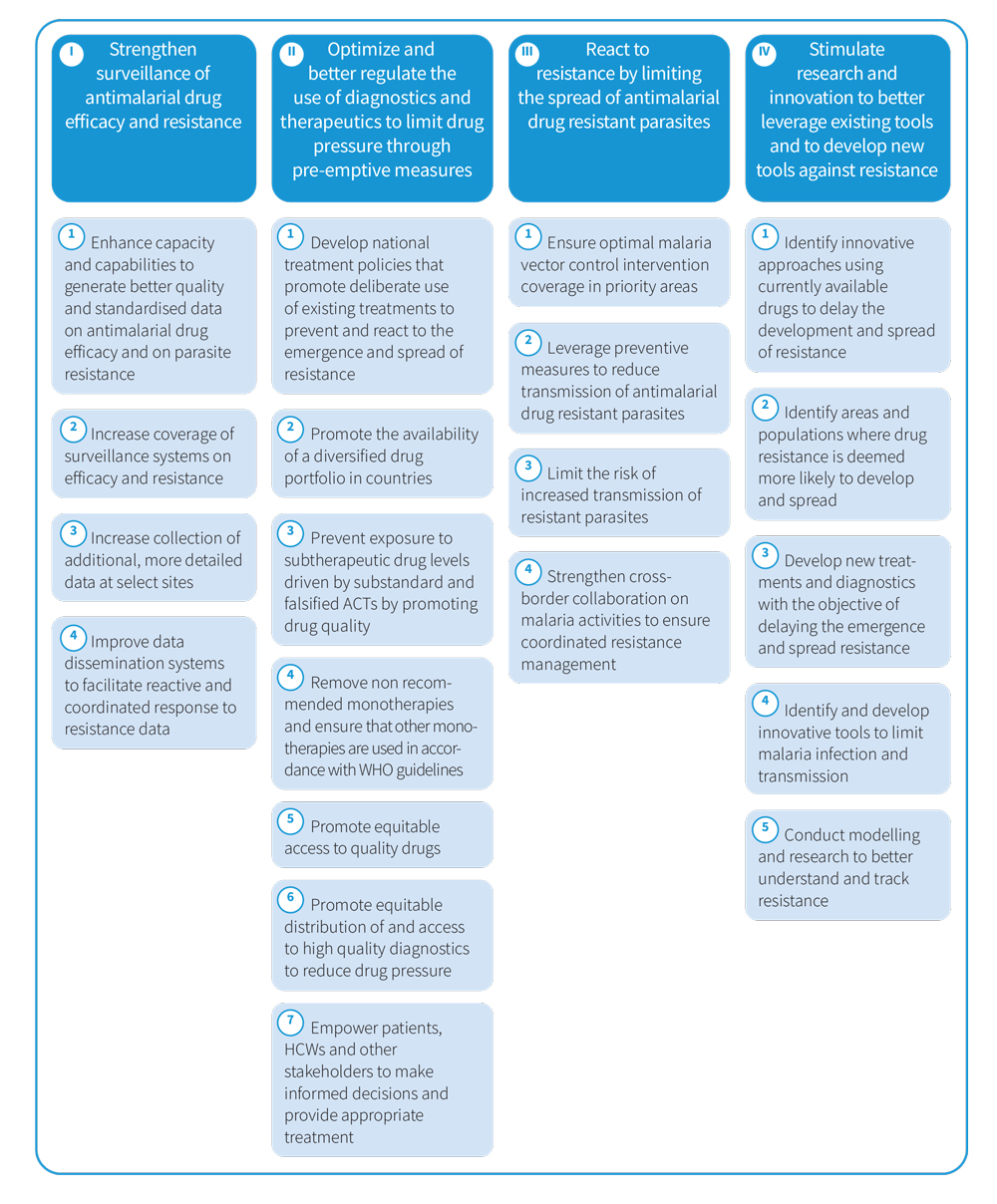 Sub-Saharan Africa bears nearly the entire global burden of malaria, accounting for an estimated 96% of malaria cases and deaths in 2020; approximately 4 in 5 of these deaths were among children under the age of five.

Despite the considerable efforts to tackle malaria in Africa over the last 2 decades, progress has plateaued in recent years and, in many countries with a high burden of the disease, cases are on the rise. Emerging threats, such as antimalarial drug resistance, could derail progress even further.