“We must end the pandemic through the rapid and equitable distribution of vaccines in every country in the world,” said Paul Kagame. “And we must chart a pathway back to global growth.”

By Julius Bizimungu with The New Times Rwanda

President Paul Kagame has told global leaders that the world should come together in the fight to end the Covid-19 pandemic through equitable distribution of vaccines.

He was speaking during the virtually-held G20 summit, which he addressed on behalf of the New Partnership for Africa’s Development (NEPAD).

The meeting, which was hosted by Saudi Arabia, was attended by among others, heads of state from the most industrialised countries in the world.

Kagame said that this year’s summit was dealing with the most urgent tasks facing the international community.

The G20 meeting happens against the backdrop of the global race to develop vaccines and therapeutics for Covid-19, which has so far affected 57.9 million people and claimed 1.4 million lives since the first case was recorded in China towards the end of last year.

The race to develop vaccines has reached an impressive stage as most candidates including global pharmaceutical giants Pfizer, Moderna and AstraZeneca whose vaccines have shown promising results in human bodies. 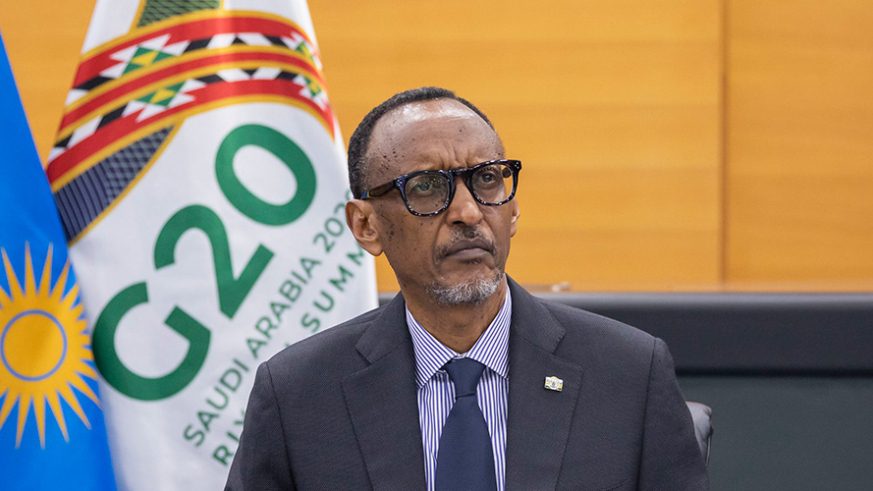 President Kagame commended the G20 for mobilising resources for the Access to Covid-19 Tools Accelerator, in particular, the COVAX facility – a global mechanism to ensure quick procurement and distribution of vaccines once available.

“Fully funding COVAX is essential for ensuring that the vaccine is available everywhere,” he noted. “And we cannot forget that strong national health systems are necessary for effective vaccine distribution.”

The Head of State highlighted that containing the pandemic permits a return to growth, but does not guarantee it, and that the ability of countries to finance economic recovery is highly variable.

“For that reason, the G20’s continued commitment to the Debt Service Suspension Initiative is of central importance,” he noted, adding that the programme alone will not be sufficient.

Instead, he argued that additional stimulus will be required in developing countries, just as it is in advanced economies.

“We must continue to work together to ensure that no one is left behind, as the world recovers from this crisis.”